You may remember that I completed a Whole30 challenge last year with a couple fabulous health bloggers. It went well, but I’ll admit I slipped pretty quickly once it was over. This happened from poor lifestyle choices, not the challenge itself.

With that in mind, I decided it was time to start up a second round of Whole30 this past January to see if it would stick.

A lot of people have questioned this challenge, many believing that it’s not sustainable or that people use it as a quick fix to lose weight or obtain certain results in little time. While I haven’t used Whole30 either time as a quick fix to anything, I will admit that it’s not sustainable, mainly because Whole30 allows zero “cheating,” and that’s just not realistic in the world we live in today. You’d have to be a superhuman to make this last forever.

With that in mind, I do find Whole30 to be sustainable for 30 days, and from there you’re encouraged to take what you learned and be smart about food in the future, and that I do believe is a realistic goal. 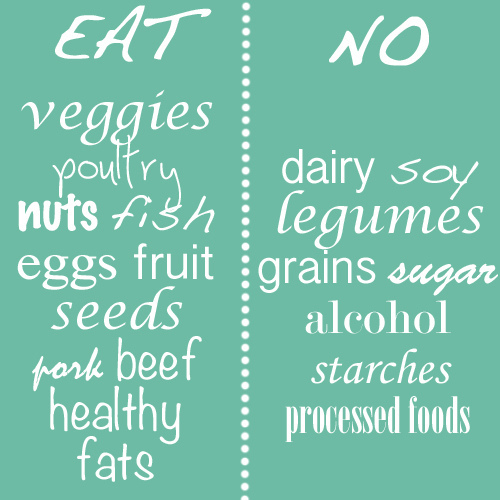 The plan also encourages drinking plenty of water, getting enough sleep, not weighing yourself and focusing on the delicious foods you can eat instead of what you can’t eat. The book It Starts With Food outlines this in more detail.

Now, on to what I’ve learned. Below are the top 10 “life improvements” I’ve noticed after completing my second Whole30 challenge. Some deal directly with food, but there were also a few additional health and lifestyle changes.

My Whole30 Resulted in These 10 Health & Lifestyle Improvements

Digestive disorders are all too common in the United States due to the typical American diet. I’ve seen my fair share of regular digestive upset because of this. While doing Whole30 I didn’t notice a single instance of digestive upset. Going from daily upset to nothing just by eating Whole30-approved foods is reason enough to maintain such a lifestyle as much as possible.

Cravings are a real beast. One of the main goals of Whole30 is to combat unhealthy food cravings, primarily sugar because sugar seems to be in almost everything these days. Personally, I’m overly fond of chocolate. I have a dish of Dove chocolates at my desk for myself and coworkers. It’s been three days since my final Whole30 day as I write this, and I have yet to grab a square. I also don’t feel the need to snack or grab something unhealthy like I used to. Something must have gone well.

I’m sure you’ve all heard of something called “bored hunger,” the idea that you can eat something simply because you want to or because you’re bored. This used to happen to me a lot between working at a desk and spending my nights reading, writing or watching too much Netflix. You think about food so you eat food. Well, not anymore. After getting on an eating plan of smaller meals throughout the day, I don’t feel a need to eat snack foods and consume unnecessary (and unwanted) calories. Read Next: 38 Proven Tips to Stop Overeating

4 Put the Brakes On “Out to Eat” Habits

Going out to eat is a real problem for me, as is visiting coffee shops. Getting myself into the habit of not going out during Whole30 has really helped me kick this habit. I went out a few times for previously planned family events and book club, but the random “because I feel like it” outings stopped entirely. Instead, I got into the habit of preparing meals and cooking at home.

I’m not fond of the time it takes to make meals sometimes, but I do love to cook so forcing myself back into this habit was well worth it. I highly encourage you to discover a love for the kitchen if you haven’t already.

I said this during my first Whole30 and I’ll say it again: getting enough sleep is crucial. I used to toss and turn for an hour before I’d fall asleep, and much of it stemmed from eating too close to bedtime. Find a time to have your final meal and stop there. Your body doesn’t need that random snack just because you feel like it. Bedtime snacks shouldn’t exist, not unless it’s another word for supper and it happens hours before bedtime.

Also, don’t let yourself be a slave to those last few chapters of a book or the final episode of your favorite TV show that you thought was good idea to catch up on right at bedtime. I know it’s hard, but they’ll be there the next day. Your body will thank you for making sleep a priority.

I’ve noticed an unfortunate misconception in this country that sugar will give you energy, and that’s simply not true, at least not in the long run. I found myself having more energy after getting rid of sugar than I ever felt while consuming it. The body isn’t meant for the amount or types of sugar the average American consumes.

The only sugar I’ve had this past month was the natural sugar found in fruits and some vegetables. Getting enough sleep also helped with energy levels, as did being more active. You don’t need sugar or special drinks or pills to have energy.

My hair has always been a bit of a disaster, and my skin has never been completely clear. My hair now feels more manageable and less frizzy, and my skin continues to clear up. My nails have a shine I’ve never noticed before, and they also aren’t breaking like they used to. Remember, this is just from food. It really is that amazing.

I’ve always enjoyed finding new recipes to try. I worried about repeating my previous Whole30 with the same meals, but I only ended up repeating two recipes that I loved so much I had to make them again. It’s amazing how many food bloggers are out there finding new ways to make food taste good without repeating the same regular meal plan. I’ve included some of my favorite recipe pictures below.

I’ve been a fan of forming online friendships since early high school. There are so many fascinating people across the world, and the Internet gives us access to “meeting” those people. I have the privilege of working with health bloggers at Swanson, which helped me easily find Whole30 participants in the blogging world as well as on social media sites.

Finding like-minded people on the same journey is inspiring. There’s no reason to do Whole30 alone. I highly recommend finding a supportive community when trying to obtain any health or lifestyle goals.

10 Motivation to Continue & Teach Others

Something happened last time I finished Whole30 that I didn’t fully accept until my second round. I finished, packed up my enthusiasm, and returned to the lifestyle I’d previously lived. This wasn’t the fault of Whole30, but instead it was a lack of motivation on my own part. I don’t know what’s different this time, but I haven’t packed up and moved on, and I don’t want to.

On my last week of Whole30, a coworker told me she was going to get started on her first Whole30. Handing off It Starts With Food and flooding her inbox with tips and tricks felt rewarding. I was passing the torch while keeping a little bit of the flame for myself. I know I won’t keep up with a 100% Whole30 lifestyle, but I do know that something really close to it is going to stick better this time around.

Have you ever tried Whole30 or a similar plan? Thoughts?