Blog / Recipes & DIY / How to Use Cinnamon for Cooking & Health

Cinnamon rolls, snickerdoodle cookies, Cinnamon Toast Crunch. Those are the first things I thought of when I began researching this cinnamon-focused blog post. I thought to myself, “What a delicious assignment!” Little did I know, cinnamon is one of the most widely used and highly beneficial spices out there. It can be sprinkled, simmered, baked with or taken as a supplement. It’s full of nutrients and has long been known as a blood sugar regulator, not to mention countless other health benefits.

Similar to my recent post on ginger, I went on a cinnamon investigation. I came across tips, recipes and fun facts that I hope you’ll enjoy. Let me know if you’ve got a unique recipe or use for cinnamon; I’d love to hear from you!

About Cinnamon: "The Sweet Spice"

There are more than 250 species of Cinnamon, which leads to information overload. Here’s what you need to know: Cinnamomum verum (or Ceylon Cinnamon) is known as “true cinnamon.” Cinnamomum cassia is less expensive, and is the most common use of the word “cinnamon.” Most of the research for diabetes and blood sugar management involves C. cassia. Cassia has a stronger flavor, but C. verum is generally considered to have a more delicate flavor suitable for desserts.

What are the Health Benefits of Cinnamon?

Being one of the most versatile spices out there, the ways to use cinnamon are endless. Most of the benefits come from consuming it, but it also is shown to deliver an energizing scent that increases alertness. Here are several ways that consuming cinnamon is beneficial: 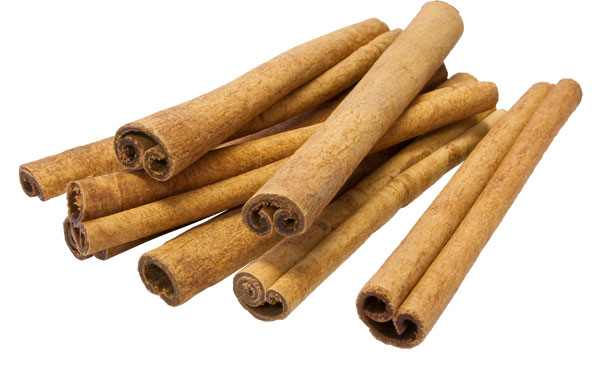 - Promotes healthy weight management when paired with diet and exercise

13 Cinnamon Uses For In The Kitchen

1Change up your hot cup of tea by adding a pinch of cinnamon.

2Try a different kind of meat flavoring. Combine some cinnamon with your favorite spice rub.

3Sprinkle it on some baked vegetables or fruit. You can use cinnamon on more than apples and sweet potatoes.

4Stir it into pudding or other desserts. Enjoy the health benefits of cinnamon by combining it with those sweet desserts.

6Add a new flavor to your favorite curry recipe.

7Mix in a few teaspoons to your favorite hot oatmeal or cold cereal.

9Spice up pancake batter by using a teaspoon or two of cinnamon.

10Combine a few teaspoons of cinnamon with peanut butter and enjoy with celery sticks.

11Shake a bit of cinnamon into your morning smoothie to give it some extra spice.

12Combine cinnamon with honey and coat raw nuts. Then roast in the oven for a crunchy, sweet & spicy treat.

13Awaken your morning coffee by adding a pinch of cinnamon to it.

Cinnamon Recipes (and How They Turned Out)

When it comes to using cinnamon in my everyday life, I must admit that I have only tried it in sweet recipes. For the sake of this post—and for the sake of trying something new—I decided to try one sweet recipe and one savory. Enjoy! 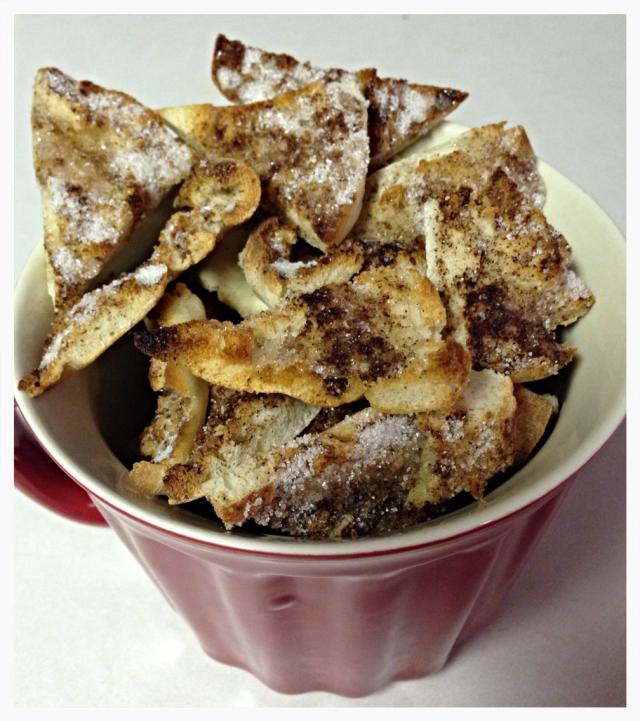 First off, I made pita bread according to the Pita Bread recipe we recently featured on the Swanson Recipes page. Then, I modified this recipe for Garlic & Herb Pita Chips. Here are the easy-to-follow steps:

2. Cut pitas into 8 wedges each and separate each wedge at the fold. Place the pita wedges rough-side up, in an even layer on the prepared baking sheets. Brush with oil and sprinkle with cinnamon and sugar.

3. Bake the pita wedges, switching the baking sheets halfway through, until golden and crispy, 6 to 10 minutes (depending on the thickness).

Note: I found it helpful to switch my oven to broil at the end of the 6 to 10 minutes, for extra crispiness.

Who doesn’t love a good slow cooker meal? I found a great recipe from this fun blog called Life With 4 Boys. The recipe recommends combining all of the ingredients and then freezing them in a zip-top bag until you’re ready to use, but I decided to make mine the next day, so I just refrigerated it over night.

Step 1: Combine all ingredients in a gallon zip-top freezer bag. Make sure all the air is out before sealing shut.

Step 2: Remove the meal from the freezer the night before serving and defrost in the fridge.

Step 3: Pour contents of the bag into your slow cooker and cook on low for 6 hours or high for 4 hours. 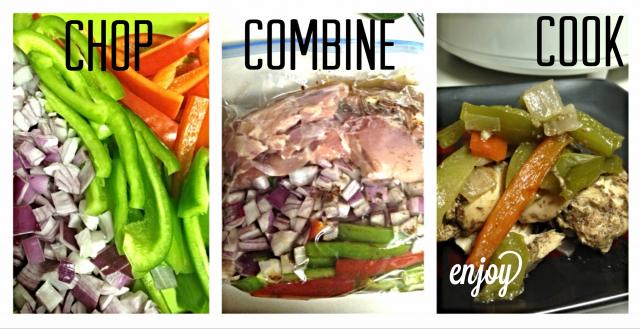 In my research for this post, I came across a couple of interesting uses for cinnamon, besides the traditional ones. Enjoy! 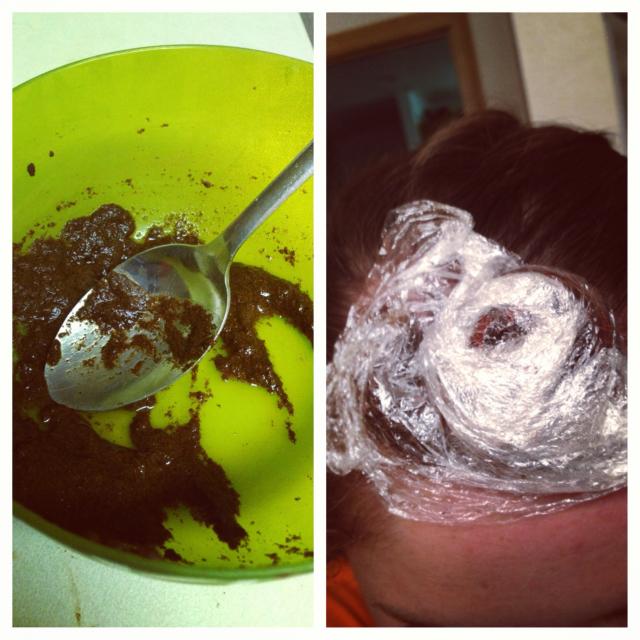 Just when I thought I had seen everything cinnamon-related that the Internet had to offer, I found a bunch of blog posts that said that cinnamon would lighten hair. Naturally, I had to give it a try. I didn’t follow any one recipe; I just came up with my own, and tried it on a small section of my hair.

The first time I tried it, I put conditioner on my wet hair first, then added the water/cinnamon paste. I left it on all night, covered in plastic wrap, and washed my hair in the morning. Nothing. I tried it a few more times, each with a different ratio of cinnamon to water, and even included lemon juice a couple times. Still no results! Sadly, I think this might be a bust.

I've always loved the idea of decorating with cinnamon sticks. Especially around the fall/winter months, they deliver a glorious smell to your entire house. I saw a few ideas online, and sort of combined them all to make up my own. Here's what I came up with:

1. Select a glass piece to decorate. I went to the thrift store and bought a 75-cent candle holder. Keep in mind the larger the piece, the more cinnamon sticks you'll need.

2. Glue cinnamon sticks in place with a hot glue gun.

3. Decorate! I wrapped twine around my candle holder several times, until I liked the look of it. Then I hot glued a flower on the front, where the seam of the twine was. The flower works as a way to keep everything in place, all while making it look great! 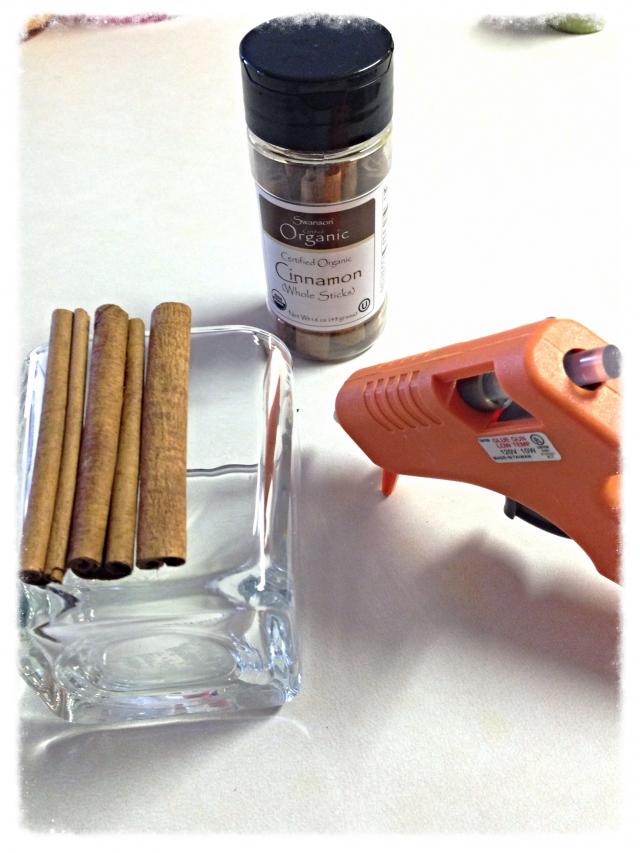 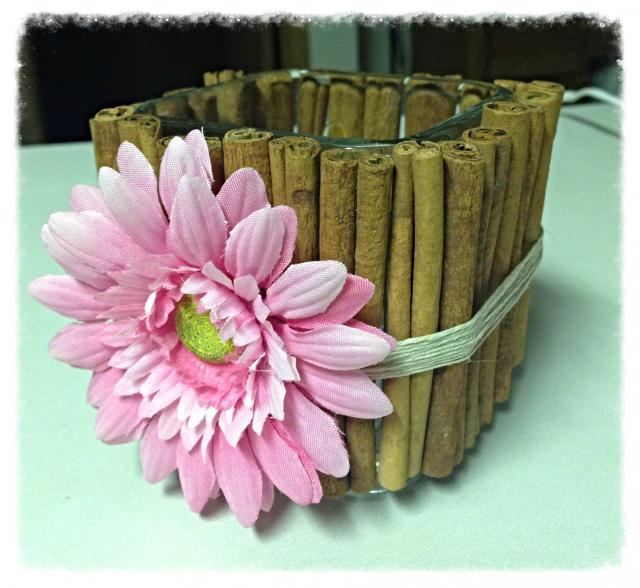 I coat my chicken with a cinnamon/salt/pepper blend and fry it in coconut out [oil]. ~ Terry S.

Cinnamon toast, of course! I buy a sprouted flourless bread from Trader Joe's, toast it, sprinkle lots of cinnamon on it, then drip some organic honey over the top, spread it around, and enjoy a wonderful, healthy desert! ~ Leslye R.

Dump one ooling tea bag, 1/2 tsp cinnamon, 1/4 tsp ginger, dash of cayenne pepper in a measuring cup. Pour 8 oz boiling water over the mess, steep until it cools a bit. Remove the tea bag, then pour the rest into a 16 oz insulated mug filled with ice. Top it off with water. Drink. Repeat. ~ Joellen F.

We use it in oatmeal, pumpkin. Pancakes, banana smoothies, over baked apples, in coffee and on chicken. It's such a versatile spice. ~ Janet G.

Mix with xylitol or truvia and sprinkle on sliced bananas. That is my 2 year old's favorite. ~ Katie H.

On my oatmeal, on sweet potatoes, and with a little butter and brown sugar on butternut squash. ~ Evelyn V.

I put it in my coffee filter before I put the coffee in & run the water thru...it is wonderful!! ~ Dawn H.

Our favorite way is to sprinkle cinnamon and olive oil on sweet potato slices, bake them in the oven for some heathy and tasty "fries." ~ Cymry M.

Cinnamon, Ginger, Turmeric and a little cumin in a spice jar all together. Sprinkle it on hot/cold cereal, waffles, French toast, tea, and cocoa. Also for sore throat, cinnamon, lemon, honey and hot water. ~ Vanessa B.

Cinnamon is my secret ingredient in chicken salad. I sprinkle it on the mayo before stirring it all together. Yum. ~ Jackie W.

In my coffee every morning. Everyone at work says it smells so good! ~ Cheryll M.