Blog / Bath & Beauty / How Dangerous Is Your Shampoo or Conditioner?

After doing a post on nail polish toxicity, I decided to research other products for toxic ingredients. I wanted to reduce the amount of unnecessary chemicals absorbing into my body, so I knew I had some work to do.

Once I started researching shampoo and conditioner, I saw how many articles popped up, and I learned a lot more than expected.

For example, some labels don't list toxic ingredients if they're byproducts or trade secrets.

Some ingredients are worse than others, and there are many more out there. There are a lot of bad ingredients in shampoos. This is just a starting point to make us all aware of what’s in the products we use all the time.

Top 10 Toxic Ingredients to Avoid in Shampoos and/or Conditioners 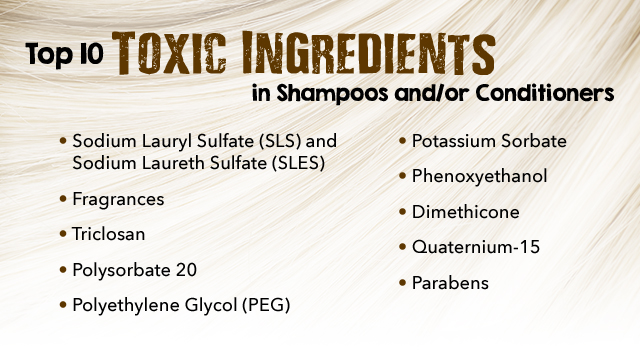 SLS and SLES are surfactants often found in cleaning products. They are typically used as foaming agents in shampoos, soaps and more. The American College of Toxicology found that SLS can penetrate the skin and stay in the body for up to five days. SLS can also strip moisture and oils from hair and skin, which may cause rashes.

SLES is like SLS, but it is also often contaminated by 1,4-dioxane, a byproduct of ethylation oxide, which helps make harsh petroleum-based ingredients gentler. Since 1,4-dioxane is a byproduct, it usually isn’t listed in the ingredient list on products. SLES stays in the body longer than SLS because the liver can’t effectively metabolize it.

Fragrances can come from more than 3,100 chemicals, some of which are highly toxic. Many may cause allergies, brain fog, headaches, liver toxicity, organ toxicity and more. The Environmental Working Group found that fragrances are often a blend of 14 chemicals. Because some of those chemicals are trade secrets, they often aren't disclosed on labels.

Triclosan can accumulate in fat cells and keep your body in a state of toxicity. It can cause endocrine disruption, organ system toxicity or skin, eye and lung irritation. It may also impair muscle function and skeletal muscle contractility. According to a study at the University of California Davis, researchers said the effects of the chemical on cardiac function of mice were very dramatic.

Polysorbate 20 is often used as a surfactant or emulsifier in cosmetics. It is derived from lauric acid and is a chemical mixture of sorbitol ethylene oxide. It is often used to dissolve fragrance and other oil additives. Often found in conditioners, it may leave residue on the skin and scalp. It also may disrupt skin’s natural pH balance or destroy the skin's natural protective barrier.

PEG features high levels of dioxin, a carcinogen and byproduct of the ethoxylation process. Often found in conditioners, PEG is often used in products to help create a creamy texture. Natural Society said PEG may include 1,4-dioxane and ethylene oxide, known carcinogens. PEG can cause irritation and systemic toxicity if used on broken skin.

Potassium sorbate is often used as a preservative in hair care products. It may cause skin and organ system toxicity.

Phenoxyethanol is a preservative often used in cosmetics and hair care products. It may cause organ system toxicity and skin, eye and lung irritation. The FDA warned it can cause central nervous system shutdown and vomiting. Phenoxyethanol is a skin and eye irritant, and it is restricted for use in Japan.

Dimethicone is a man-made silicon oil often used in personal care products as an anti-foaming agent, skin protectant and skin and hair conditioner. It makes products spreadable so they glide easily across the skin. It also forms a protective barrier on the skin, which traps bacteria, sebum and impurities. It also irritates eyes.

Quaternium-15 is an ammonium salt often used as a surfactant and preservative. It acts as a formaldehyde releaser, and formaldehyde is a known carcinogen. It may be very toxic and cause allergic reactions because it can release toxins and chemicals.

Parabens may cause reproductive damage and organ toxicity. They can be irritating to the skin, especially those with sensitive skin, and may cause allergic reactions.

Some of these ingredients are easier to avoid than others. Trying to cut out even a few from products you use often is a good starting point.

Cleaner, less toxic shampoos and conditioners are out there. The shampoos often don’t lather because they don’t have SLS or SLES, and the conditioners might not make your hair as soft or smooth, but they’re still effective.

Where to Buy Safer Shampoos and Conditioners

Not sure where to find shampoos and conditioners that are better for you and for the environment? Check out our selection of natural beauty products including soaps, shampoo and conditoners, cosmetics, anti-aging solutions and more. You can also make your own DIY Apple Cider Vinegar Shampoo!

Reading ingredient labels is the number one defense we have for avoiding toxic ingredients. I admit that I never gave much thought to labels before, but now that I know more about toxic ingredients I’m more careful about the products I use.

I hope this list has made it easy for you to avoid bad chemicals and toxic ingredients in shampoos.

Do you currently use more natural shampoo or conditioner, or which brands would you be willing to try?