Blog / Food & Nutrition / Can the Vegetarian Diet Get Complete Proteins?

As a recent convert to the vegetarian lifestyle, I knew I had some research to do.

I made the decision to go vegetarian on February 25, 2015, and it’s so far been the easiest decision I’ve ever made.

Almost any dietary regimen—whether it’s vegan, paleo, Whole30 or something else—will be met with questions and skepticism.

“That much bacon will kill you!” they warn.

“This weird thing you’re doing with food,” they reference.

“But where will you get your protein?” they ask.

The questions can get old fast.

I was very interested when my coworker Chelsea wrote "A Guide to Complete Proteins."

To see how it might apply to my new diet and lifestyle, I figured it was time to take another look at this important dietary concern.

My original hope with this blog post was to showcase vegetarian-friendly proteins that are considered “complete” and then offer suggestions on various combinations of “incomplete proteins” vegetarians can make to receive complete proteins.

But what I found was a long-lived myth that generates very strong reactions within the vegetarian, vegan and omnivore communities.

What Exactly Is a Complete Protein?

A protein is a complex compound made from strings of amino acids, the basic building blocks of proteins. Our bodies can’t produce essential amino acids on their own, so we need to consume them within the foods we eat each day.

Now that I know where those are, the next questions came immediately.

Are those essential amino acids available in non-meat proteins?

Can I get those simply from eating a regular vegetarian diet?

Historically, having a meat-based diet was a sign of affluence. The rich had luxurious meals of meat, and the lower class was stuck with a “poor” plant-based diet.

According to nutritionist Jeff Novick, MS, RD, the idea that animal protein was superior to plant protein became mainstream after a book came out titled Diet for a Small Planet by Frances Moore Lappè. Novick explains on the Forks Over Knives website:

Another reason for the popularity of this idea is that Lappè wasn’t the only one promoting it. In his article Protein Propaganda, author Michael Dye cites a 1914 rat study as the basis for the beginning of the complete protein concept.

Dye points out, though, that “the whole theory behind the need to consume ‘complete protein’ — a belief once accepted as fact by medical and nutritional experts — is now disregarded.”

Lappè as well recanted her statement in the tenth anniversary of her book.

So why does this myth continue?

Cynics say that there is profit to gain in establishing animal-based protein as the “highly esteemed” protein.

Thinking that the only sufficient sources of protein are dairy- and meat-based products is backed by the profitable and successful business of those industries.

Driven by profit over truth, plant proteins are deemed insufficient and the need for animal-based protein is amplified.

The optimists will say that there is a lack of understanding about the concept of protein and what is necessary for proper function in the body.

Let’s Talk about Food: Why Vegetarian Proteins Are Enough 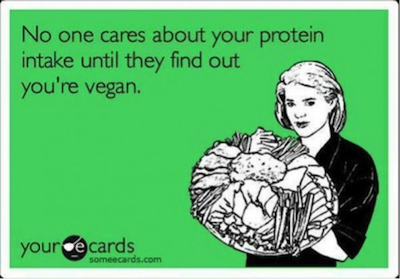 According to this chart complied from USDA data by Michael Bluejay for his website, Vegetarian Guide, the content of amino acids in each protein source exceeds our bodies’ actual needs and daily essential amino acid requirements.

According to the Academy of Nutrition and Dietetics, vegetarian sources of complete proteins include amaranth, quinoa, eggs, milk and tofu.

As Coworker Chelsea stated in her post, “There’s no reason to worry too much about complete protein intake so long as your diet is varied. Why? Because you only need to get sufficient amounts of the essential amino acids every day, not every meal. So, a varied plant-based diet should provide your daily amino acids without much effort."

Here are some delicious examples of vegetarian meals that deliver complete proteins:

Still the stigma persists that vegetarians and vegans have to scrounge for protein at every turn. If an omnivore has a toaster pastry for breakfast, how many people will worry that she’s not eating complete proteins in that one meal? A balanced diet will always involve varied and complementary food groups.

If ensuring that you get all your complete protein with a vegetarian or vegan diet is important to you, there are certain combinations and pairs that can guarantee that an adequate amount of each amino acid is consumed.

According to Nutrition411, the best combinations for complementary proteins that are available to herbivores are as follows:

If people choose to eat meat or not, their individual protein amounts and essential amino acid profiles will be adequate if they change up the foods that they eat.

There are enough amino acids in varied herbivore and omnivore diets to ensure we have enough protein in our bodies.

You don’t need to calculate the amino acids in each protein in your vegetarian diet or create delicious complementary protein dishes if you don’t want to.

I like to change up my diet and continuously make up new dishes and combinations with the various foods I eat, and now I know that I only have to wonder about which recipe to try next, not if I’m getting enough complete proteins.

Have you ever worried about getting enough protein on a vegetarian diet? Why does this concern still exist?