At least that is what the internet and many health fanatics have been proclaiming for a few years now.

Kale has had its reign as a superfood and has been all the rage (right up there with quinoa, acai and chia). Even McDonalds is testing a kale bowl!

But the question is, is it worth it?

For me anyway, it boils down to this: It’s delicious. It’s quite nutritious. It’s easy to grow and versatile to cook with. And it’s a much better choice than some other foods I used to stock up on (but then again, I am a recovering junk food junkie after all).

Oh, and my doctor keeps reminding me to eat my dark, leafy greens, and in that sense, kale totally fits the bill.

Why is kale so great? Well, 1 serving of raw kale delivers: 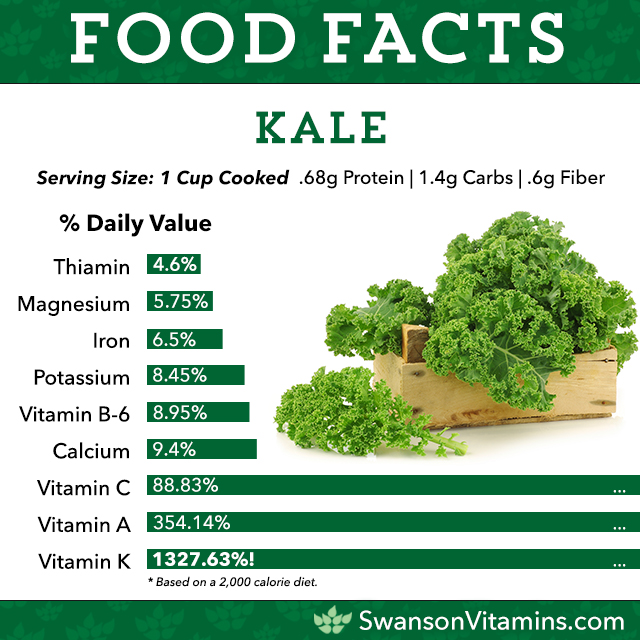 I did find plenty of kale criticism though.

One article claimed that kale actually has too much fiber for some people’s digestive systems (particularly those with IBS); it contains raffinose, which can be hard to break down; and raw kale can affect your thyroid gland function.

Another article insisted that there are 10 other greens healthier than kale, arguing other veggies had superior nutritional value.

Kale can be bitter (but not if you cook it the right way), it’s obnoxious to cut out its core (but the best things require working at it) and it’s not quite as easy to inhale as a bag of spinach, but that’s OK. I don’t hold it against it.

Kale’s not perfect, but what is? For me anyway, its pros outweigh its cons, and frankly, it’s still pretty darn good.

Kale itself comes in several different varieties (including lacinato, red Russian and curly kale), and each has a slightly different taste, texture and appearance, but they all seem to have similar nutritional profiles.

How does it compare to other dark leafy greens?

Spinach has more vitamin A, fiber and protein, but kale boasts more vitamin C and K. Kale has fewer calories, but the same amount of carbs and fat.

Collard greens have more calories, fiber, calcium and protein, but less vitamin A and C.

If you’re looking for more comparisons, this article ranks 10 superfood greens with an overall nutrition score. They rank watercress at the top, followed by Chinese cabbage and chard.

For me personally, I think the important point is to make healthful choices, and any of these greens are great additions to your diet. They’re all winners in my book.

There are so many ways you can incorporate kale into your cooking. Just a few ideas include:

Whichever way you make it, the key is to removing the fibrous stem in the middle.

Once that is removed, give it a quick rinse and dry, then tear or cut it up and add it to your favorite recipes—raw or cooked.

Do you like kale? What’s your favorite way to eat it?