I know Valentine’s Day is coming up, but don’t anybody get me chocolates. I do not have a sweet tooth. Lemons, on the other hand, I can’t get enough of. I should really divide all the recipes on my Pinterest boards into “Lemon” and “Everything Else.” So when we got a new protein powder in I found a lemon-centered recipe and whipped up some smoothies.

This vanilla-flavored Vegan Protein with Probiotics is new to the virtual shelves at Swanson. Part of the Swanson GreenFoods Formulas line of products, it mixes easily with water, juice or your preference of milk. I used coconut milk, but almond milk, hemp milk or any other would work just as well, as long as it’s unsweetened. Swanson Vegan Protein Powder is sufficiently sweetened with natural stevia. Our Vegan Protein Powder delivers 18 grams of plant-based protein per serving. There is some rice protein and some hemp protein, but the primary source here is pea protein. Pea protein is an amazing plant-based source of lysine, arginine, and branched chain amino acids (BCAAs), all important for energy and lean muscles. It's a great option for people with dietary sensitivities to soy, whey or dairy. The inclusion of rice protein also boosts the amino acid profile. 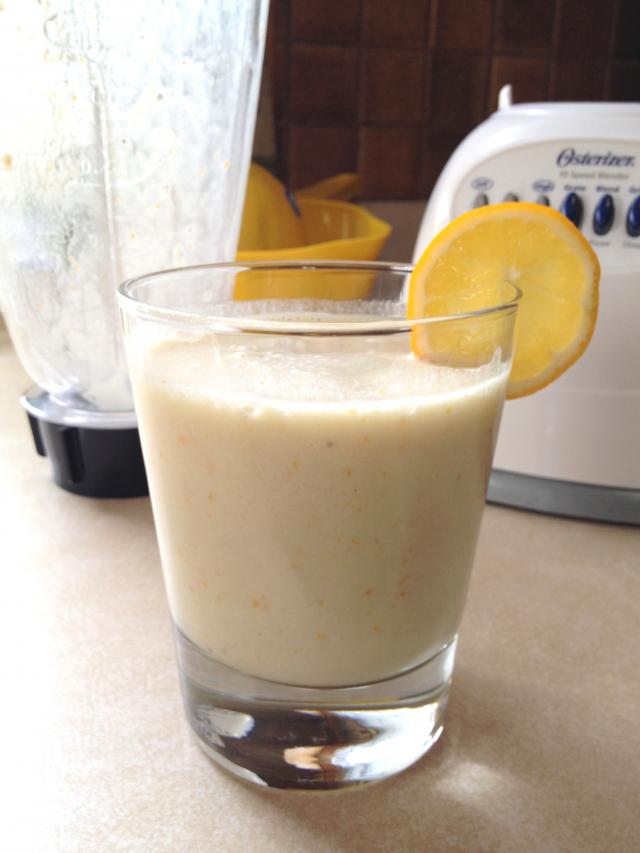 I’m using Meyer lemons here. If you’ve never had one, you’re missing out on a beautiful little yellow delicacy. It’s lemon, but not the face-scrunchingly tart flavor of a regular lemon.

Zest one lemon. Slice off the rind of both—you do not have to be diligent about this. Actually you could leave it on and it wouldn’t hurt anything. Quarter the lemons and remove the seeds. Throw the lemon, banana, milk, protein powder, coconut oil (optional, but adds smoothness and a boost of energy-enhancing medium-chain triglycerides) and the ice cubes in the blender and process until smooth. I added xanthan gum to thicken it up, but that’s completely optional (I just happened to have some on hand from some awesome gluten-free cookies I made for the holidays). If you choose to add this, do so at the end—just give it one or two more pulses to combine. This made about 16 ounces.

After that, I tried a Key Lime version and a Peanut Butter Banana version (wherein I learned my husband hates bananas. Who knew?). These—and really, any other combination you can think of—are just variations on a theme, subbing out one feature flavor for another.

The Key Lime Smoothie used 2 tablespoons of Key Lime juice instead of the 2 lemons. I cheated and used pre-bought juice. Frankly, I was just too lazy to juice a dozen of those itty-bitty Key Limes. Of course, this means I missed out on a pretty garnish and some DIY cachet.

Other feature-flavor combos to try: orange, mango, Swanson Organic Pomegranate Juice, Tart Cherry Juice, Beet Juice maybe with some spinach if I want to go the vegetable route…or pick a few items from our top 15 smoothie ingredients post. Other suggestions? Do you have a favorite smoothie recipe?