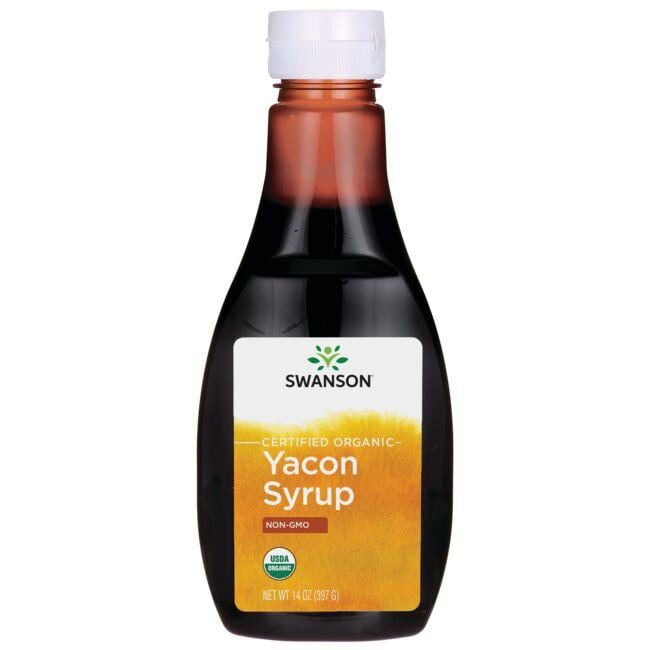 Please note: Some packaging may vary while our labels get a new look.

approximately about 60 servings per container

* The % Daily Value (DV) tells you how much a nutrient in a serving of food contributes to a daily diet. 2,000 calories a day is used for general nutrition advice.

Directions: Take one teaspoon (7g) as desired. Use place of honey, molasses and other sweeteners.

by our team of internal scientific & wellness experts

If you’ve been struggling to shed unwanted pounds, we have some great news for you: now there’s a sweetener with only a fraction of the calories found in regular sugar. It’s called yacon syrup, and it’s rapidly gaining popularity as a low-calorie sweetening option for those fighting “the battle of the bulge” and others looking for different ways to eat healthier without skimping on taste. Hailed on popular television as a “metabolism game-changer,” its delightfully sweet, rich flavor has enabled thousands of dieters to satisfy their sweet- tooth without compromising their weight loss goals. Plus, Yacon Syrup's remarkably low glycemic index makes it great for those on restricted diets.

When tasting yacon syrup for the first time, most people find it hard to believe that it has only five calories per teaspoon. The secret? Most of yacon’s sweetness comes from fructooligosaccharides (FOS), a type of sugar molecule that stimulates the taste buds much like ordinary table sugar, but passes through the digestive tract unmetabolised, reducing the caloric value. Instead, FOS serves as a source of nourishment for the beneficial probiotic bacteria that reside in the lower GI tract.

Swanson 100% Certified Organic Yacon Syrup is derived exclusively from organically grown Peruvian yacon root through an extraction process without the use of chemical solvents. It is 100% pure with no additives, preservatives or artificial ingredients of any kind. Whether you’re trying to lose weight or simply looking to cut back on the sugar in your daily diet, yacon syrup—along with healthy diet and exercise—can help you accomplish your goals while still satisfying your desire for life’s sweeter things.

As versatile as it is healthy, Swanson Organic Yacon Syrup makes a tasty addition to yogurt, cereal, juices or smoothies, or you can use it as a substitute for honey, maple syrup or molasses in the kitchen or on the table.

Combine ingredients in a blender and blend until smooth.

To spice up this recipe, you can add cacao nib

These statements have not been evaluated by the Food and Drug Administration. This product is not intended to diagnose, treat, cure or prevent any disease.

For our website and catalog, the MSRP is the "Manufacturer's Suggested Retail Price." The MSRP is understood to mean the price at which a manufacturer will recommend a retailer sell a product for in stores, on the internet, or in catalogs. The MSRP of National brand items are dictated to Swanson by each manufacturer. For Swanson brand items, the MSRP is calculated based on a varying percentage above the product's base price.

Disclaimer: Product reviews are provided for informational purposes only. The information or opinions expressed therein are solely those of the contributors and do not necessarily represent those of Swanson Health Products and its employees. Please read full product reviews disclaimer.
1-5 of 25 reviews
sort by:

Us on syrup
This is the first time I’ve ever used product and it is very sweet. I used it to make bread. A great product for diabetics.
Helpful?

Swanson Health started in 1969 in Fargo, ND with a mission to offer pure and potent health products at a great value. Over 50 years later, we continue to innovate science-backed vitamins and supplements, delivering wellness solutions that help people live simply healthier together, and find vitality at any age. Click here to learn more about us.

For over 50 years, Swanson Health's research and development team has delivered science-backed health and wellness products to people around the world. Our innovation is guided by clinical research, scientific consensus, emerging research and usage traditions, creating products that help you find vitality at any age. At Swanson, we don't hide our science behind proprietary formulas — we believe in easy-to-read, transparent labelling. What's printed on our labels, is exactly what you'll find in our products.

Swanson Health's purity and potency testing begins with our ingredient sourcing, continues through manufacturing, and goes beyond when a product hits the shelf. Our testing exceeds industry standards, ensuring each product meets our quality guarantees for purity and potency. Swanson facilities are Good Manufacturing Practices (GMP) certified, and we voluntarily participate in third-party, independent laboratory testing. With Swanson, you can be sure you're getting the most pure and potent health products at a great value. Click here to learn more about our quality standards.

TOP
Get our best deals straight to your inbox!

Your first offer is on the way!

You're now signed up to receive exclusive deals and savings opportunities!

Thank You! This email address is already signed up.

Thank you for your interest and be assured that you will continue to receive our emails at this address.

We are having trouble processing your request. Our apologies! Please try again later.

These statements have not been evaluated by the Food and Drug Administration. These products are not intended to diagnose, treat, cure, or prevent any disease.